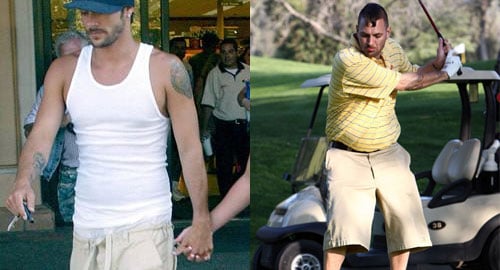 It’s been reported that Kevin Federline is getting $5,000 a week from Britney to bring her kids on tour with her. He’s also the newest pseudo-celebrity to get his own reality TV show, which is undoubtedly a well-paying gig too (though producers were upset to find out the name “The Biggest Loser” was already in use). Based on these pictures, I’m gonna go ahead and suggest that a good chunk of those paychecks are going to the good people at Entenmann’s.

K. Fed’s supposedly gained 85 pounds since his 2006 divorce to Britney. He used to weigh in at just 150 but the National Enquirer claims he now weights 235. He’s so big that Britney’s now insisted that “he go on a diet and stop showing their kids it’s OK to be fat and sloppy.” She’s nicknamed him Kevin Fatterline and teases him, asking, “When’s the baby due?” and calling him “a fat housewife.”